The first commercial solar water heater, the Climax, was introduced to California homeowners in the late 1800s. Patented by Clarence Kemp, the Climax sold for $25 and promised savings of about $9 per year in coal. An ad from the time, featuring a housewife in “Gibson Girl” attire and another family member in the bathtub, states, “We Put ‘Em Up, Old Sol Does the Rest.” 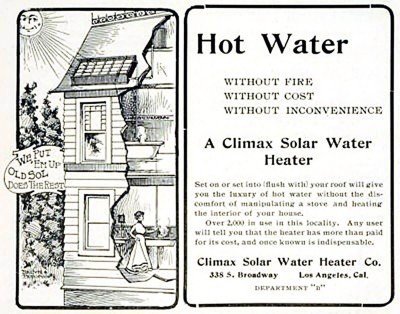 The ad goes on to explain the benefits of solar hot water. “Hot Water…Without Fire, Without Cost, Without Inconvenience. Set on or set into (flush with) your roof will give you the luxury of hot water without the discomfort of maintaining a stove and heating the interior of your house.”

But when cheap natural gas was discovered in southern California, the market for solar water heating systems in the area effectively dried up. In the following years, interest in solar hot water remained limited to warm, sunbelt states because the systems couldn’t withstand freezing temperatures.

This boon spawned a plethora of problems, however. While some manufacturers sold and installed high-quality systems still in existence today, other disreputable salesmen and poorly trained installers took advantage of homeowners. These non-professionals put systems on rooftops that failed to generate the expected energy performance or panels that leaked due to improper installations. A lot of these systems and many of the DIY panels suffered freeze damage making them even less desirable.

By 1986, tax rebates disappeared, oil prices plummeted and most solar manufacturers and contractors went out of business.

All the Convenience of Traditional Hot Water Systems

Solene by AET Systems features all the convenience and reliability of traditional hot water systems combined with the substantial savings and environmentally-friendly benefits of solar water heating.

Solene by AET Systems are the highest-rated in the industry and can be configured for all climates and weather conditions. With certifications including FSEC, IAPMO, OG-100 and OG-300, Solene by AET Systems and collectors qualify for current federal, state and utility company rebates and incentives. These incentives, combined with significant monthly energy savings, make Solene by AET solar water heating systems a great investment. Most Solene by AET Systems pay for themselves within 5 years. Because these systems typically last 20 years, homeowners can enjoy an additional 15 years of free hot water.

Today’s eco-conscious consumers can appreciate solar water heating for more than financial rewards, however. By investing in solar energy, consumers reduce their carbon footprint, reduce dependence on fossil fuels and leave a legacy of clean energy for generations to come.

4 Tips for Investing in Solar Pool Heating Systems Solar pool heating systems are a great investment, as heat from the sun is more...
Read Article
Solar panels can be great in any city where there’s a little bit of sunshine. However, the more sun there is, the more power...
Read Article
Solar energy is the new thing in conscious energy these days, and with so many trendy investment opportunities, it’s hard to know if investing...
Read Article
In 2018, there was a constant state of innovation with new advances in solar panel technology that was developed simultaneously. There have been thousands...
Read Article

Start saving now! Take the first step to learn more about solar pool heaters and how they work.

Get the Latest in Solar